The Students Representative Council (SAC) of the Students’ Union Government (SUG) of Nnamdi Azikiwe University, Awka wishes to notify the general public, the university authority and, indeed, the students of this prestigious institution of the suspension of Samuel lude Chimuanya as the SUG President on the following grounds.

1. In the press release made by the Students Representative Council (SRC) dated Thursday, 25 February 2021, a copy of which was received by Samuel Jude Chimuanya, we notified the general public the university authority and the students of this prestigious institution of the motion for the impeachment of the Samuel Jude Chimuanya as the SUG President where we directed him to address his response to the issues raised against him in the motion of impeachment in writing to the Students Representative Council (SAC) within twenty four (24) hours 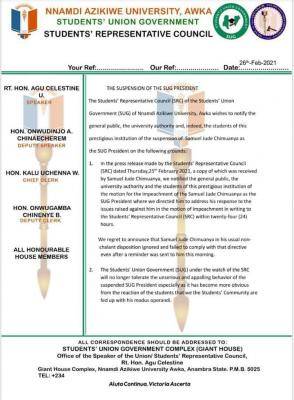 2. The Students’ Union Government (SUG) under the watch of the SRC will no longer tolerate the unserious and appalling behavior of the suspended SUG President especially as it has become more obvious from the reaction of the students that we the Students Community are fed up with his modus operandi.

3. We believe that Samuel Jude’s refusal to comply with the directive of the SRC is intentional and intended to undermine not only the affairs and activities of the SRC but also that of the Union and the student in general.

4. Samuel Jude’s non-compliance with the directive of the SRC points to the obvious fact that the he has somethings he is hiding. An innocent man would loudly denied serious accusations leveled against him. However, the SRC has chosen to allow the impeachment Panel to decide whether he is guilty or not.

Samuel Jude Chimuanya is hereby directed to handover all properties belonging to the Students’ Union Government (SUG) of this prestigious institution in his possession to the other members of the Executive with immediate effect as he ceases to be the SUG President pending the decision of the impeachment Panel, failure of which will attract serious disciplinary actions against him.

The SRC also wishes to give him a second chance as he is further directed to appear before the impeachment Panel on Monday, 16 March 2021 by 10AM unfallingly.