Ad: Looking for a Platform to Advertise Your Products For Free? Visit Siggy.ng today!

Does UTME/JAMB Runs or Upgrade Works? 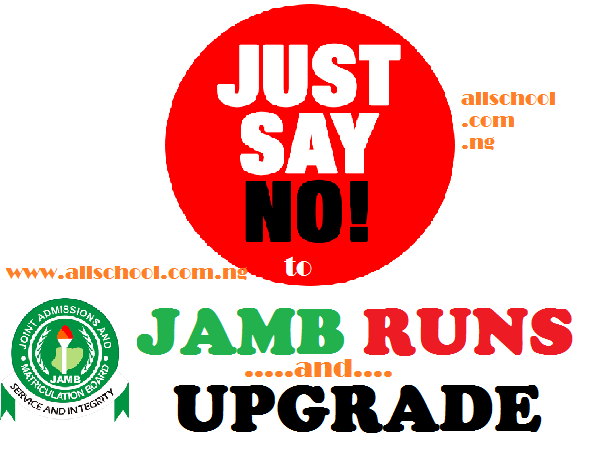 It has been a routine for some individuals to collect hard earned money form Nigeria students with the disguise of providing answers to JAMB questions popularly called (JAMB RUNS/Expo). After the release of the UTME results, that same set of individuals collects money from JAMB candidates promising them they will upgrade their UTME/JAMB result.

Most ignorant candidates seeks to know if those people are real. Their (JAMB candidates) question are coined like; “Is JAMB Upgrade real?”, “Will JAMB RUNS work?”. If you are among this candidates, AllSchool have something to tell you in this page.

In this page AllSchool is here to categorically state that JAMB RUNS Does not work! For lazy students who don’t want to read, this should be a bad news! But that’s the fact!

The story was interesting right?? The short story should help convince but not confuse you that you just have to say no to JAMB Runs/Upgrade!

JAMB RUNS OR UPGRADE IS SCAM RUN AWAY FROM IT! Anybody supporting that is a fraudster! Be warned and don’t forget to share this page with friends using the Facebook, Twitter or Whatsapp button.

Here at AllSchool, we wish you gain admission into your dream school to study your dream course!

All school, stop pretending here, you collected an amount of money from me promising you will upgrade my school to no avail, up till now..u never did as promise.

Now u are here talking this, foolish guy.